928 million litres of sewage nothing to be sniffed at.

928 million litres of sewage nothing to be sniffed at.

Taking on the recent Moa Point sewer interceptor overpump was a major responsibility by any standards. Adding to the pressures of environmental sensitivity and intense public scrutiny was the need to safeguard a crew working in the pipe. All this while under Covid-19 lockdown.

Interflow NZ were awarded the contract to rehabilitate both the 1800 dia and 1350 dia intercepting sewer pipes by re-lining. Interflow engaged experienced Wellington contractor E.N Ramsbottom to carry out the overpump portion of the work. The repairs were carried out successfully and very smoothly due in no small part to meticulous planning and the combined expertise of E.N Ramsbottom and the team at Prime Pump. For both companies it was one of the largest projects of its kind that they had handled.

The repairs had been fast-tracked after internal corrosion of the pipes had been discovered during an inspection of a section of interceptor, which is the main pipe carrying Wellington’s wastewater to Moa Point for treatment.

Before the interceptor could be relined it had to be overpumped. This diverted the wastewater flowing through the interceptor allowing access for the relining machine and its crew. Relining had been chosen as the most resilient solution and to avoid the more costly, disruptive and time consuming option of digging-up the underground pipes.

The discovery of the issue with the interceptor came hot-on-the-heels of two well-publicised pipe failures in other areas of Wellington. Public interest was high, particularly in light of the Moa Point location; right next to Lyall Bay and near the Wellington International Airport and a residential area.

Michelle Hoffmann Contract Manager at E.N Ramsbottom says there were a lot of stakeholders. Among them; the airport, active community groups, the public and the wastewater treatment plant itself. “It was important that it went well.”

An additional complication was a relative lack of detail for the all-important flow calculations. Ricardo Holt, Hire Operations and Civil Contracting Manager for Prime Pump says one the biggest challenges was not knowing the flow or how much tidal intrusion would impact the water levels. “The Moa Point wastewater treatment plant has a flow metre, but it gives a two-hour average.” As Ricardo notes; “Flow can change massively in two hours.”

To mitigate this, night operation was chosen because the flows were more easily predicted and uneven daytime peaks could be avoided.

The six 8” BBA BA180 auto prime dewatering and sewer bypass pumps selected for the job are capable of pumping a combined 1,000 to 1,200 litres a second giving the contractors and companies involved confidence in their ability to achieve the task.

Designed and manufactured in the Netherlands, the pumps are fully-bunded making them suitable for use around waterways, with no possibility of fuel or oil entering the water flow. Ricardo says cost-effectiveness was another consideration. “The pumps’ efficiency reduces fuel consumption to a minimum. They run on significantly less than comparable pumps.”

Prime Pump has over 200 BBA pumps working in civil, construction and mining around New Zealand.

To further protect the crew onsite, and for peace-of-mind, in addition to back-up pumps, which were never required, Prime Pump fitted warning lights on the top of the pumps. These would’ve flashed if there had been any issue with pump performance.

To have everything set-up on time, Prime Pump put the pumps on one of the last Cook Strait ferry crossings from the South Island to the North Island, just before lockdown. Similarly, some staff, (like many other essential workers) left their children with grandparents in order to be available on-site.

Over the project duration, each pump at Moa Point ran for around 215 hours, pumping a combined total of 928,800,000 litres of wastewater.

This was in addition to test-pumping required to show conclusively that the pumps were more than equal to the task. The lines had not been cleaned for some time and early unexpected challenges included a work boot and a bath towel, which the pumps dealt with. The only hitch being a single suction hose which was quickly and easily replaced.

During the rest of the project the only other issue was a starter motor which was promptly repaired by Prime Pump staff.

Michelle Hoffmann says pump maintenance was an important aspect of the project and Prime Pump were always on-hand. “They were very flexible.”

“We always worked well with Prime Pump, even at the beginning of the job. Things changed a lot as we went and there were always last-minute changes but they were very accommodating.” 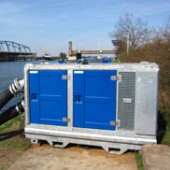