When an urgent call went out recently for a pump to remove water for repairs on Kaikoura’s earthquake-damaged rail bridge supports, Prime Pump got it there. ASAP.

Hayden, Prime Pump Key Account Manager, says the phone rang at around 2:30 on a Friday afternoon. By 10am on Monday morning the BBA B300 pump, and the tractor to drive it, were onsite in Kaikoura 326 kilometres from Prime Pump’s Greymouth base. Better still Prime Pump staff had the pump set up and ready to go, a huge advantage when others working on the job had very different skill sets.

Compact, and just 1.5 tonnes, the tractor-driven 12” pump is capable of pumping a massive 1.2 million litres an hour. At the railway bridge, it was running 24 hours to rapidly lower water, allowing the cracked concrete supports to be stripped back to the rebars then re-boxed and re-poured.

Pumping out the water was made especially difficult due to a large and unpredictable upstream catchment. Rainfall in areas feeding the river can result in water rising 600ml in just 40 minutes. Accordingly, performance, reliability and flexibility were all non-negotiable.

Hayden says the B300 has the advantage of being able to be moved quickly and easily in those, or any, circumstances. “Unclip two fittings and the tractor can just drive off with it.” That’s compared with the inevitable delays and costs of bringing in lifting equipment to move heaver, larger and less efficient pumps. On average, other pumps, doing the same job, use a staggering 18% more power than a BBA to pump the same amount of water.

It wasn’t the first time BBA pumps have flown to the rescue. Sometimes literally.

The pumps were the first on the ground following the disastrous 7.8 Kaikoura earthquake in November 2016, delivered by military helicopters from frigates based off the Kaikoura coast. The pumps provided the initial grunt needed for emergency de-watering, and continued to deliver support as events unfolded. They cost-effectively removed water from areas critical to reconstruction, helped reinstate the sea wall and assisted with the rebuild of roads, bridges and other infrastructure in the town, and along State Highway 1.

At one point, up to 13 Prime Pump pumps were at work in Kaikoura and they have continued an almost uninterrupted presence ever since. 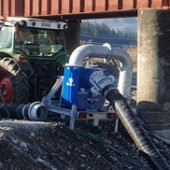 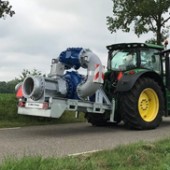