Landfills are usually in the news for all the wrong reasons. But what if there was a way not only to reduce greenhouse gasses but to cost-effectively and reliably generate power for the national grid all at a lower cost of ownership?

While only a handful are currently deployed in New Zealand, (snapped-up by early-adopters), their background and performance have very solid global credentials.

Founded in the USA over 125 years ago, Tuthill first made the bricks that helped build Chicago. When the loads became too great for the horses who hauled the bricks they created an oil pump to power a truck to take the strain off their four-legged friends. At the same time, they laid the foundations for a company with big ideas and a big heart.

Ricardo Holt, from the Prime Pump team, says he could see the potential in the Tuthill blowers, from the moment he saw them.

While blowers themselves are not new, ones as durable as Tuthill’s are rare.

A standout cost-saving feature is their low maintenance. Ricardo says he knows of a Tuthill blower in New Zealand that ran for 13 years with no maintenance. Six to ten years is usual. That’s a significant advance on others in the market.

The advantage comes primarily thanks to a unique coating on the rotors and rotor housing which substantially reduces wear and, as a consequence, on-going expense.
In usual running conditions, the huge differentials involved ( -10kpa versus +20kpa) and highly corrosive environment will take their toll on the rotors - the key components in the blowers.

The longevity of the Tuthill blowers, along with Prime Pump’s ability to service or rebuild them in New Zealand are critical to future-proofing these vital pieces of kit. 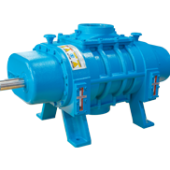 Pump your heart into it!