Prime Pump’s EnviroHub lamella tanks were the choice for the recent critical central city Wellington overpump project. At its peak, four of Prime Pumps’ HL-40 tanks were deployed on Jervois Quay to ensure that the quality and clarity of water pumped back into the harbour, just 50 metres away, was crystal clear.

The remediation project for Wellington Water had begun in dramatic circumstances, with a sink hole opening-up in busy, six lane Jervois Quay in February 2021. After inspection, it became apparent that the cause was the collapse of an aging earthenware storm water pipe. The 450mm diameter pipe, estimated to be around 100 years old, filled and emptied with the tide.

Crews initially installed a temporary fix and backfilled the sinkhole, allowing Jervois Quay to be reopened and options for a repair or replacement to be investigated.

In April attempts to replace a temporary section also failed. A full replacement was required and steel plates were installed at the time to ensure the safety of the Quay for road users.

Challenges on the pipe replacement project were significant and immediate, not least because of the ongoing risk to drivers and need to prevent possible flooding in the CBD. Additionally, the sea front was adjacent. This meant any discharge into the harbour would not only have to meet consents but would be very visible to residents and stakeholders, putting project performance under intense scrutiny.

The importance of Jervois Quay as a commuter, freight and emergency route meant any remediation would inevitably be disruptive, and would necessarily impact drivers and the CBD.  The decision was made to close all six lanes for a four-day period over Queens Birthday weekend when traffic flow was reduced so multiple crews, overseen by lead contractor E Carson & Sons, could work around the clock to replace the pipe. This was planned to enable work which would normally have taken six weeks to be completed in the shortest possible period of time.

In fact, the contractors brought the project in 36 hours under their Tuesday morning deadline, an impressive result considering the complexity of the task and the physical restrictions around the site.

While the EnviroHub lamella tanks used are a relatively new product for Prime Pump they are a proven technology with an impeccable heritage. New Zealand- manufactured, and English-designed, they are the brainchild of the originator of modern lamella plate settlement tanks. In the EnviroHubs, he has refined and adjusted the system to achieve the optimal angle for superior performance and solids separation.

Prime Pump’s General Manager Glenn Powell says increasing sensitivity of the need to take care of our water purity means EnviroHub is a product whose time has definitely come. “We’d travelled extensively overseas and thoroughly scoped out what was available. This is absolutely the best that there is.”

Already, early adopters in this country have seen the significant benefits of EnviroHub particularly compared with traditional SRPs (settlement retention ponds). A six square metre EnviroHub tank can do the work of a conventional 50 square metre settlement pond with the advantage of space saving and scalability.

Glenn Powell says the Wellington CBD project was the largest to date for the EnviroHubs but they performed well above expectations.

“EnviroHubs were selected by E Carson & Sons for the Jervois Quay project because of the very real potential for an environmental disaster if the quality of water discharge had fallen short of what was demanded.”

“Obviously that just wasn’t an option. They had to go perfectly, and they did.”

Prime Pump is no stranger to high profile projects, having worked through lockdown on the successful Moa Point sewer interceptor repair overpump where six of their 8” BBA BA180 auto prime dewatering and sewer bypass pumps were deployed.

On the Jervois Quay project, the company also more than delivered again.

Because the EnviroHubs worked so well on site, they used less flocculant than comparable systems; another bonus for contractors, marine life and the harbour users.

In keeping with a focus on environmental sensitivity, the EnviroHubs also conserve energy by using solar panels, rather than conventional generators, to power it’s flow switch and activate essential chemical dosing.

Ben Beatson Prime Pump Civil and Mining Sales Engineer was the boots on the ground for the company on this project. He said the confidence the contractors had in the EnviroHubs’ performance allowed them to just get stuck in and get the job done. “I think they were quietly impressed. The water quality couldn’t be faulted. They were working brilliantly. I think it also answered a lot of questions for the Council too.”

The previous alternative settling options for jobs similar to the Jervois Quay project were large, cumbersome tanks which aren’t as efficient.

“They would’ve taken up more space, are less manoeuvrable, less effective and less suited to a built-up area like central Wellington.” In contrast, the EnviroHubs, which are available for sale or hire, can usually be set up within a day. 100m 2 of silt settling capacity (two tanks) can be easily transported on a single 14m 2 truck deck. “It’s not a problem,”Ben says.

On the tight Wellington site, every square metre was vital and the EnviroHubs fitted in perfectly allowing work to continue around them, unimpeded.

Ben, says Prime Pump were initially asked what the tanks were capable of handling and how many would be required. “We made the calculations and matched the EnviroHubs’ capabilities with the need.”

“They ensured discharge compliance and minimise damage to the environment and disruption to the adjacent businesses and residents.”

The tanks’ sediment discharged can be easily cleared once a day and a sight glass allows visual monitoring of the silt in the tanks. This means there is no chance of the settled product building up too much and mixing with the clean, treated water.

Prime Pump have EnviroHubs available in a range of sizes and can also provide sophisticated bench testing and environmental reports, depending on the individual project. 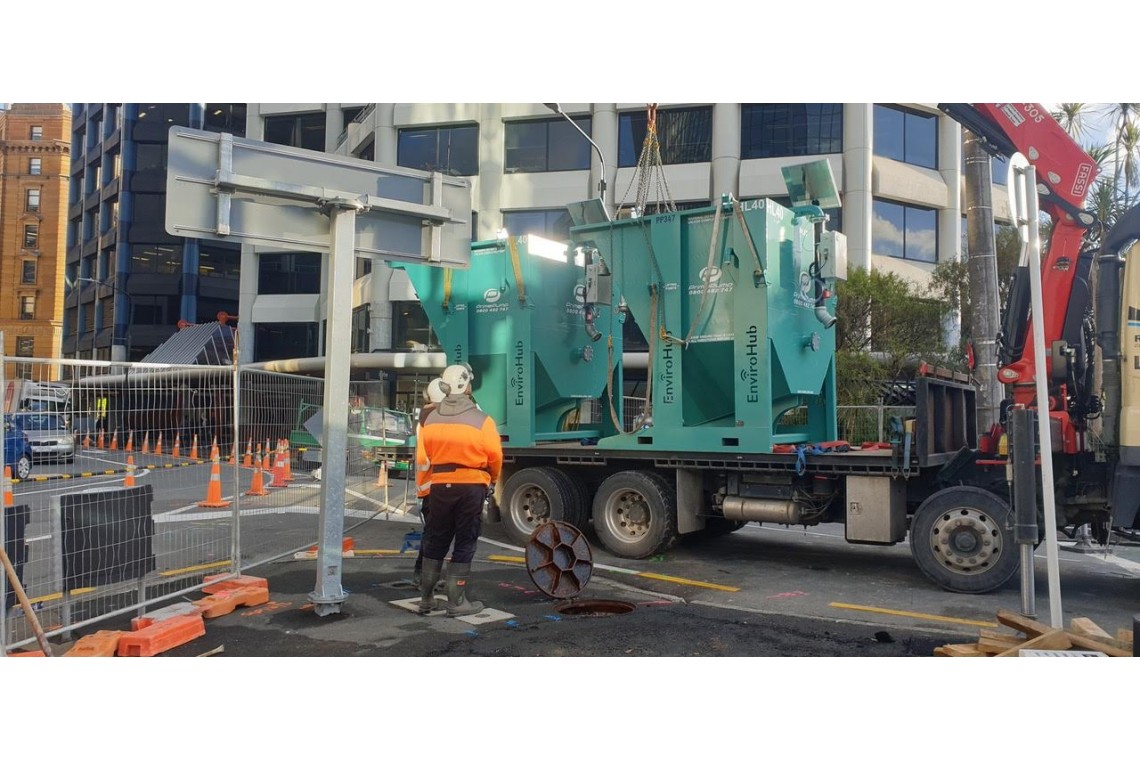 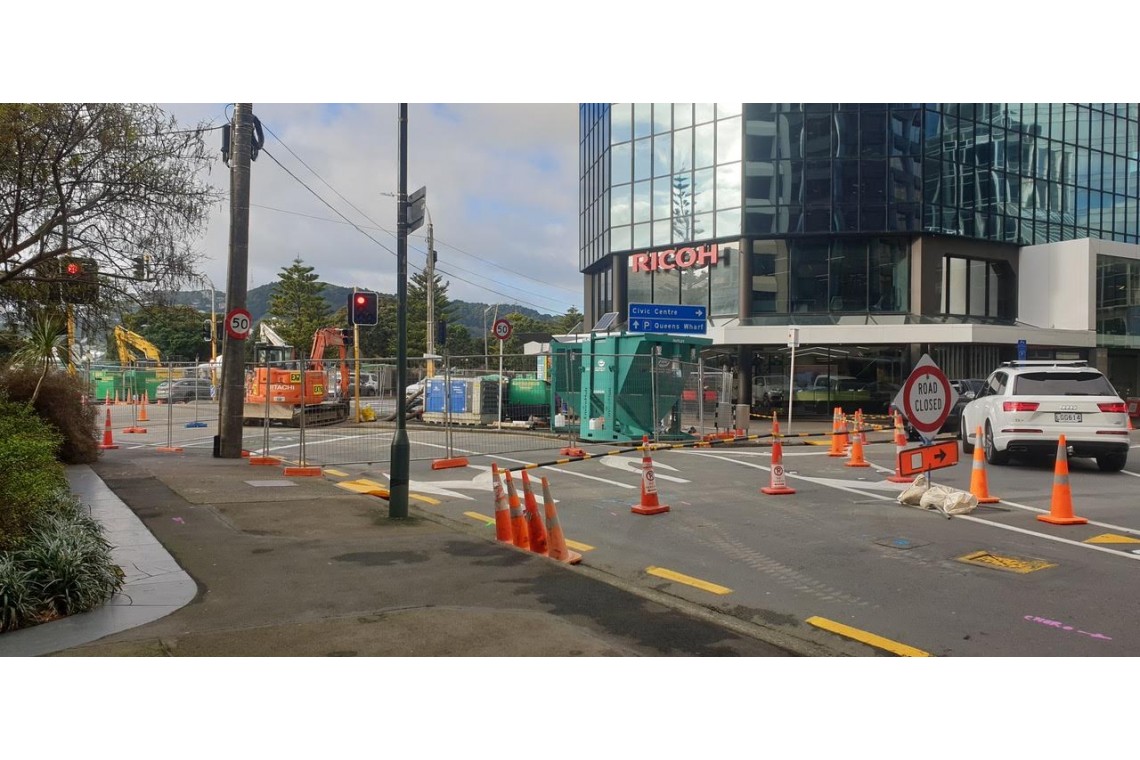 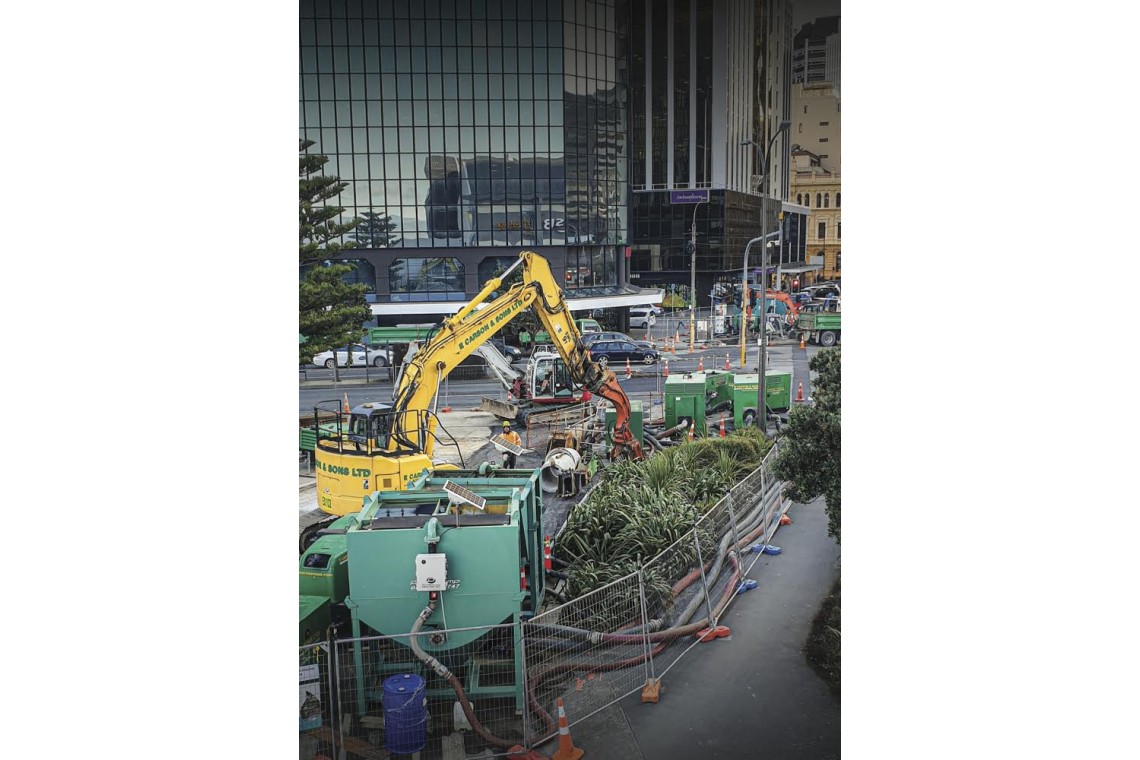 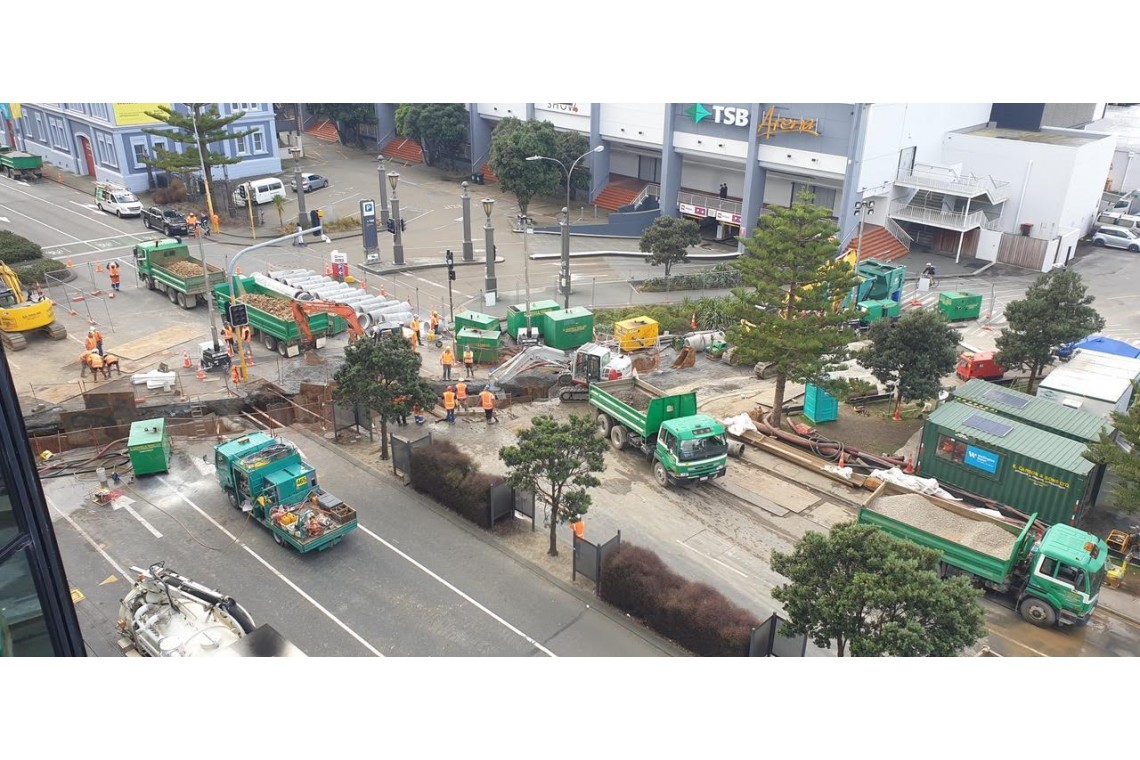 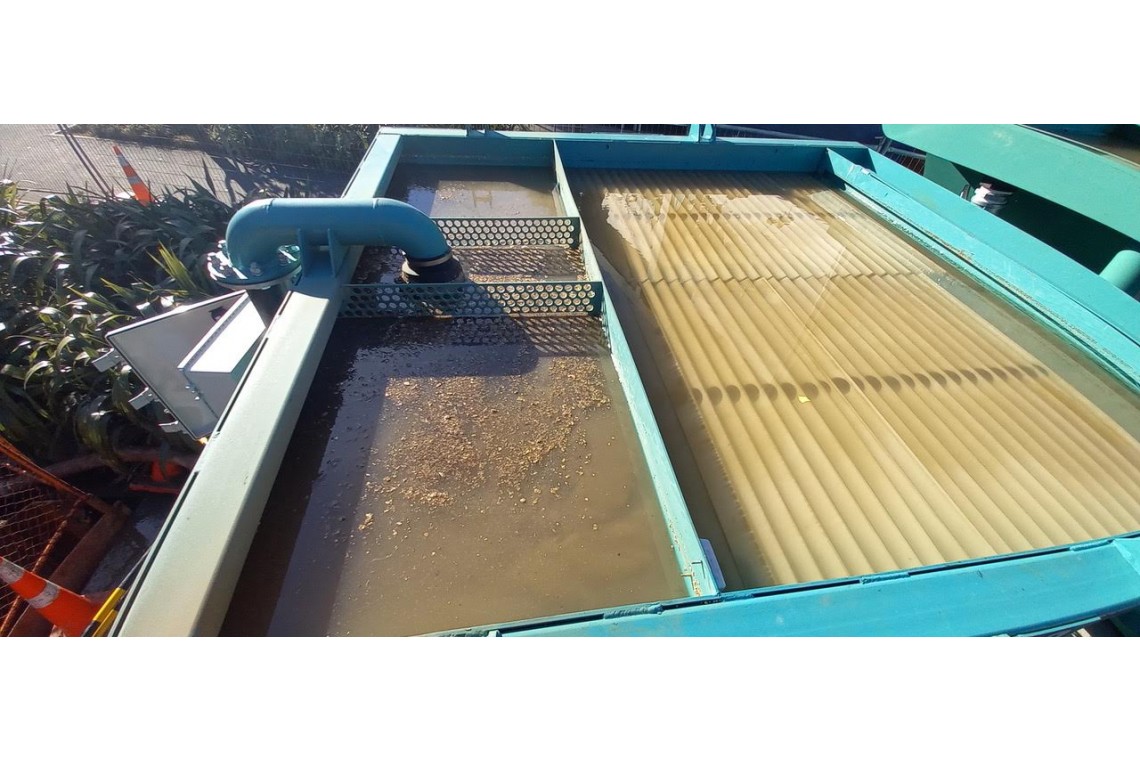 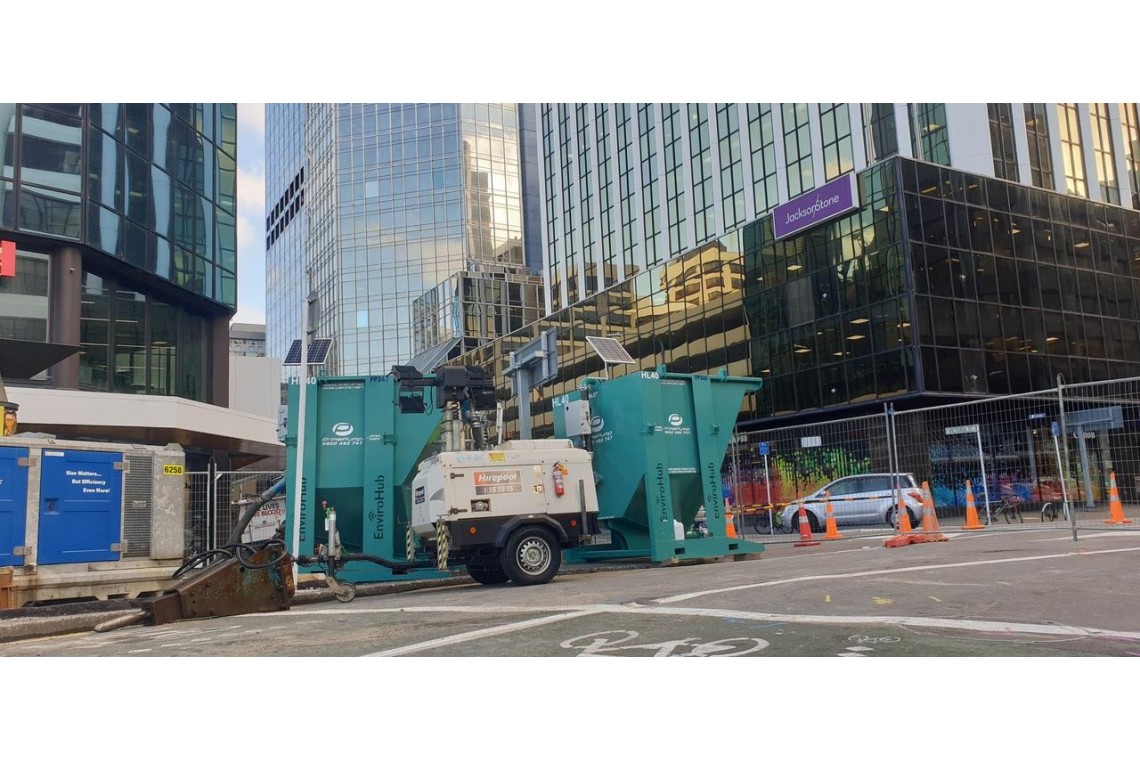